It's 5:30 on Saturday morning and I'm waiting to catch an Uber to the airport. While packing up my suitcase I couldn't help but reflect on the past three days spent at Laracon, an annual gathering of Laravel developers in Louisville, Kentucky.

Hopefully, I can capture the fleeting thoughts before the rush of the day begins.

Colin DeCarlo, in his talk titled Keeping Eloquent Eloquent, began by asking us to imagine what we would be doing if the world of software development didn't exist. He had us pause, close our eyes, and picture how we would make a living, spend our free time, and imagine what career path we may have chosen.

My mind immediately jumped to woodworking, as it's one of my favorite hobbies. After a few seconds, though, I zoomed out to a broader scope: building... taking materials and assembling them into something that did something.

This exercise brought clarity into what I love about development: using software to build mechanisms that do something. While the software I write may not affect millions of people, it's my hope that some of it will affect the lives of at least a few.

As I looked around the auditorium, I realized I was sitting with more than 500 other builders.

Another fascinating talk was given by Zeev Suraski, one of the earliest users of PHP and most influential people in the development of the language.

Zeev pulled back the curtain and gave us a tour of the humble beginnings of PHP, the struggles of speeding up the core engine, as well as the choice to abandon years of development when it became obvious that version 6 was not going to be a success.

Fortunately, the failure of one version didn't end up in the failure of the entire project. The core team persisted and has recently delivered version 7, which, as Zeev illustrated, is significantly faster than all prior versions.

As a woodworker who is interested in not only using quality tools but also understanding how they are made, this walkthru the history of PHP from one of the creators was fantastic. A handful of people were able to build something that powers millions of websites and has provided accessible tools for builders like me to make a living. 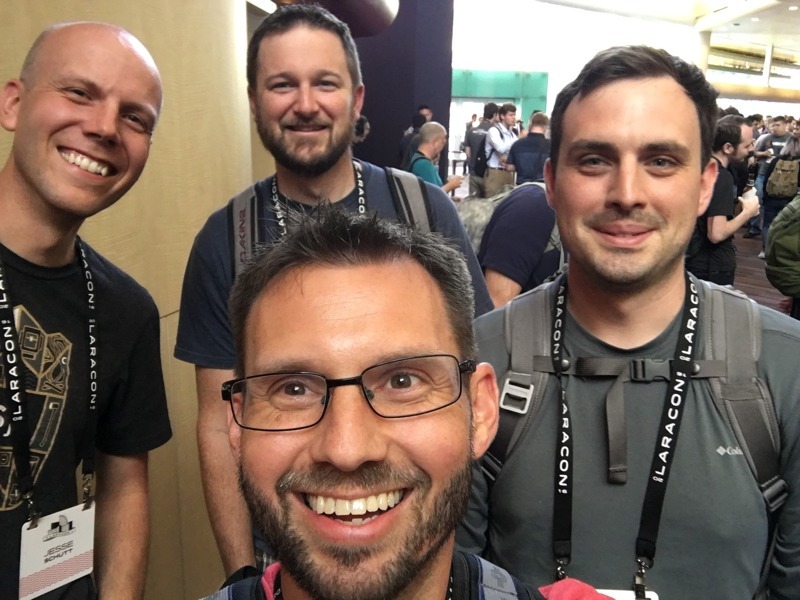 While I enjoyed and benefitted from the talks, there's no question that the real bonus from attending an event like Laracon is the connections forged with people.

The camaraderie built over meals, between seminars, and while walking to and from the venue are ultimately what I come for.

I'm guessing I'm similar in personality to many of the developers I sat with over the past few days: I'm socially awkward. I'm not good at making small talk. I'm better at constructing polymorphic model structures than I am at ordering off a menu at the restaurant. I'm probably blunter than I should be.

However, I do care about you, even if I don't know how to show it as eloquently as some.

That's what I love about events like Laracon. It's safe to be a nerdy developer.

So, thanks Eric, Jack, Jason, Phil, Garret, Jeremy, and to the many others I was able to sit and dream about building things with over the past three days. You all rock.

Until next year, keep building.